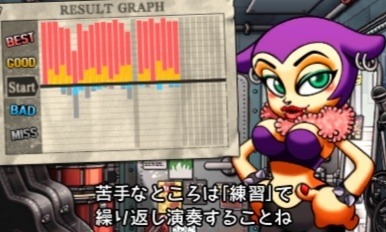 The third Band Brothers title, the sequel to Jam with the Band and the only first party title sandwiched in-between Pokémon and Christmas (unless Mario Party is given a last-minute release). First impressions are astounding due to the sublime presentation. You first have your photo taken, speak into the mic then sign your name before seeing how you look in the game. A refreshing change from (re)using your Mii; my Daigasso! character features my actual face, but with comedy wig, John Lennon sunglasses and a whopping Wario nose!

After seeing your final character you then visit Giri Giri Island (which resembles Tomodachi Island somewhat) with movement made via Brunch Panic style camper van (unfortunately not controllable). Each location on the Island (there are only four) comes with a trailer with English subtitles in kind of the weird Chibi Robo Live-Action! voice (if you’ve played the game then you’ll know what I mean). Many Barbara (the pictured Daigasso! hostess) intuitions are given (fortunately not to Mario & Luigi levels, and are bypassed via stylus or the trusty A button). Several minutes later you’re ready to begin with the song Starlight.

Featured on a million promotional videos I indeed HATED Starlight before actually playing Daigasso! but it’s certainly a grower. What there is is a very solid rhythm game with a ton of instruments to play. This changes the gameplay little but the subtle changes are a bonus. Starlight (but not all others) has the option to be played with the Family Computer instrument with awesome retro Super Mario Bros. SFX. Three songs later and you realise you’ve actually exhausted all the rhythm game content initially available on the game card.

Not to say the game content is exhausted: there is the aforementioned million instruments of which to play each song (all with either circle/d-pad or my preferred (and easier) stylus controls) and you can create your own songs which effectively makes the game rather limitless. The main selling point of the game is the downloadable content. With 3,000 songs able to be downloaded within the game and the purchase offset somewhat by 100G (tomatoes) given free to download, well, 100 more songs. Nintendo even make this less simple than what it should be and the 100G has to be asked for and is ridiculously not compulsorily given to the player.

Despite 100 free songs available to the player, the game card only comes with these four installed so essentially the game mimics Darumeshi Sports Store in being akin to a demo. The huge difference being that Darumeshi Sports Store begins as a free download where-as Daigasso! Band Brothers P is disappointingly ¥4,800. This compromises the reviewers position: should a review score be affected by downloadable content even if much of that content is actually free? I say yes. A review (and score) should be representative of the product available as the initial cartridge, disc or download. Any additional content is essentially that – additional content.

Taking into account the additional content then Daigasso! does open up from being a game with minimal content to one with very expansive. Not just the improvements with all the additional content but the existing content is often excellent such as the Giri Giri Music Festival where you team with other players (local or online) and compete with another team by each choosing a musical instrument and then (obviously) playing said instrument. Other features include listening to radio stations with the ability to download your favourite tracks to your SD card.

Overall my score does reflect the initial content and not any additional content that is reliant upon a company’s servers. With this in mind then Daigasso! Band Brothers P is a very solid rhythm game, but that’s hardly an area where the 3DS is lacking thanks to Miku, Taiko, Theatrythym and soon Aikatsu. There simply isn’t enough content available upon initial play with additional content (even if a substantial quantity is free) feels like a chore to download, hampering an otherwise solid -but rarely spectacular- rhythm game.