Columbus Circle are releasing an Extension Convertor for GB in mid-January that allows players to play Game Boy or Game Boy Color games in their Super Famicom console (like a Super Game Boy). No price has been revealed. More images added below… 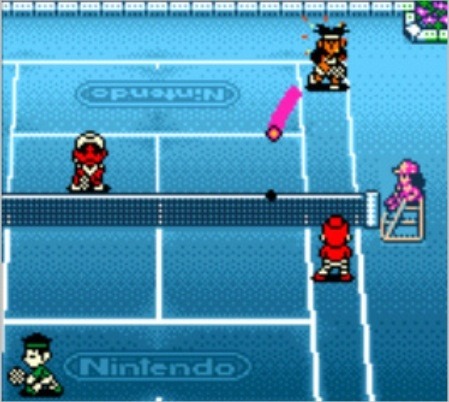 One of my absolute favourite systems -and one that I feel is given no love today- is the Game Boy Color. With far better sprites than the NES (compare the TMNT games) the Game Boy was arguably better graphically (than the NES); the much sharper colours of the GBC only cemented this fact. Unfortunately few GBC games have hit the Virtual Console. One of the more notable of the small selection is Mario Tennis. Released as Mario Tennis GB in Japan and somewhat an accompaniment to its bigger brother’s (the N64) version.

Mario Tennis GB is far more than a scaled down version of the N64 game however. With the core mechanics being very similar to the original Mario’s Tennis (on the Virtual Boy) but with an added RPG mode (looking very similar to the amazing Link’s Awakening DX), top it all off with a huge wad of mini-games (tennis versions to Darumeshi Sports Store’s baseball mini-games) and there is an absolute stack of content. Importantly Camelot achieve a perfect balance of what is available initially and what is unlockable/earned through the players hard work.

The RPG mode surprisingly doesn’t allow you to play as a Mario themed character but with a cute boy (Alex) and cute girl (Nina) choosable, you never feel like the lack of Mario character choice is the wrong move. All the characters have the excellent facials of the amazing Virtual Boy version, with every attention to detail given great consideration by the developers. The soundtrack too is stunning and sounds similar to Link’s Awakening but with the upliftingness of Super Mario Land. If all the minor aspects of the game are great, then the core mechanics are equally so.

Levelling up in Mario Tennis is similar to the fantastic DSiWare game Nazo no Mini Game upon success at any chosen mini-game or in success exhibition matches. You can choose to give the experience points earned to either yourself or your doubles partner with the levelled up player able to both enter one of many tournaments and to help excel at them. Levelling up never feels like a chore and neither exhibition nor mini-game feels like it’s either padding out the game or drags like a mandatory side-quest that hamper many RPG’s enjoyment.

The actual tennis game is very solid with both simple controls to draw in the simplest of players (such as me!) with special shots available for better or learned players, definitely distancing itself from the limitations of the original Game Boy Tennis. The difficulty curve is well implemented with the player being punished in doubles matches if the doubles partner isn’t levelled up (this is from experience!) but the player is rewarded for his/her hard-work and also you have the desire to put in the hard-work for the rewards offered and challenges posted.

There’s definitely enough content in Mario Tennis GB to satisfy someone who wants to put many hours into a game but also instant playability for someone who just wants to pick up and play for a few minutes at a time. Ideally suited for portable play and plays brilliantly on either a Game Boy Color or 3DS, Mario Tennis GB is quite simply one of the greatest games on the Virtual Console, not only being essential for RPG, sports or Mario fans but seldom has the restrictions of the genres to alienate non-fans of RPGs, sports games or the Mario series.