Back page magazine advert for Bubble Bobble 4 Friends taken from the latest issue of Weekly Famitsu. Order physical copies of the magazine here – use the code JPNINTENDO for 5% off all orders over $20!

A promo video for the Japanese release of Bubble Bobble 4 Friends which launches on 27 February 2020! Buy the game here and use the code JPNINTENDO for 5% off.

Taito have confirmed that the Japanese release of Bubble Bobble 4 Friends this February will include a copy of the original Bubble Bobble game from 1986! Buy the game here and use the code JPNINTENDO for 5% off.

Taito’s Bubble Bobble 4 Friends game has finally been confirmed for Japanese Switch release this February with more information in this week’s issue of Weekly Famitsu magazine. Bubble Bobble 4 Friends is the first new Bubble Bobble game in 24 years and features a 4-player couch co-op mode. Edit: looks like a physical release priced at ¥5,280 (including tax!). Check out the official website. 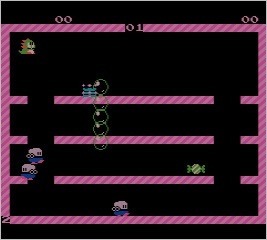 A couple of things I didn’t know about Bubble Bobble: the first being that the opening sounds like the Final Fantasy opening and the game was released on Famicom disk and not cartridge. I could add a third in that I had forgot just how great it plays! With cute characters, colourful graphics, a catchy tune, a two-player mode, perfect difficulty increases and big sprites (a must for portable Virtual Console titles), Bubble Bobble is quite simply essential!

I almost don’t know what to add: the game controls simple-y – up-down-left-right-jump-shoot and the concept is simple – shoot bubbles at the baddies then pop the bubbles, eat fruit and progress to the next screen within a certain timeframe before the main baddie Baron Von Blubba kills you. So much better than almost every other early single screen videogames (*cough* *Pac-Man* *cough*). Just buy. Now bring me Snow Bros.!

Dragon Quest Ⅹ All In One Package version 1-5