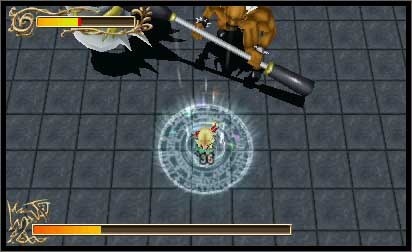 Reviewing a videogame shortly after reviewing a similar themed game is probably close to dating someone shortly after coming out of a prior relationship, with each element being unfairly scrutinised next to said previous relationship. Actually it’s somewhat worse in reality as the relationship analogy infers that one is on a rebound yet there was no unfavourable conclusion with regards to the game in question (Swords & Darkness). Fortunately the dungeon RPG Excave involves significant gameplay differences.

Excave is a dungeon RPG in the mystery dungeon sense of the, er, Mystery Dungeon series. Except without the mystery element as none of the dungeons are randomly generated. The game begins with you choosing a boy or girl character which is as central to gameplay as, say, the character choices in Super Mario Bros. USA (2) are: the boy being slower but more powerful and the girl obviously being less powerful but able to swing her weapon more quickly. A couple more selects later and you’re ready to rumble.

First impressions aren’t an either or in Excave: they are both good and bad; the protagonist is a cute character and looks great close-up, the opening (and continuous throughout) soundtrack is fantastic, but the game runs just the next level up from snail-paced and those enemy characters. Here’s where the perhaps unfair comparison to Swords & Darkness comes into play: where-as the repetitious enemy from S&D was some (cool) Ghouls ‘n’ Ghosts-esque knight sprites, Excave’s main enemy are some (uncool) coloured plastic plates.

Away from the shambolic enemy characters and Excave’s gameplay consists of dungeon crawling Gauntlet-like finding keys to open doors, killing plates to reveal treasure chests and money, and locating warps to proceed to another dungeon. It’s fairly easy to get lost with all the warp zones on offer although the character can return to the home screen at any moment and replenish his/her rucksack. Weapons degenerate over time so returning is mandatory at times and further items can be easily purchased (even select coloured keys).

I think I read Siliconera preview the game as roguelike-lite and certainly that appears to be the case at many moments throughout the game but it is not without challenge nor tactical prowess. The gender of your protagonist is just the first step, choosing which items to carry is also a bigger decision than most as similar to child Link you only have a small backpack, even escaping a dungeon renders your character still for several seconds and open to being hit and you lose a random item every time you choose to return to the home screen.

Whilst both containing simplicity and a challenge alongside some great aesthetics, it’s easy to assume that Excave is a great game. It’s true that there is hours of gameplay on offer and after a couple of them spent dungeon crawling you’ll find more enemies than simply various coloured plastic plates and swarms of wasps, the question is whether you will feel so inclined to. With comparisons to Swords & Darkness, Excave is neither as compelling nor fun and even fails to constitute an essential purchase when looked at without.